I just came across a link to this page. This will certainly be killing quite a bit of time for me in the near future. This is one of the most comprehensive lists of hop varieties I've seen, and it certainly has a considerable amount of detail as well.
Posted by Eric Branchaud at 11:50 PM No comments:

Methods to My Madness (Part 1)

One of the things I enjoy most about the homebrewing hobby is that there are so many different paths to getting tasty beer. Once you understand the basic brewing process, it's really easy to tweak your process to get the results you're looking for within your own particular set of constraints.

I brew indoors on my stovetop in a 5-gallon kettle. According to conventional homebrewing wisdom, this would seem to relegate me to partial-boil extract brewing land. Almost everything in homebrewing seems to be geared toward producing 5-gallon batches. And all-grain brewing requires a full-volume boil, so you can't brew 5 gallons unless you can comfortably bring 6 or 7 gallons (or more) to a boil.

Personally, I drink about 5-6 beers a week, or roughly a case a month. I also like to brew at least once or twice a month. The obvious solution is to brew smaller batches. Brewing 3-gallon batches solves pretty much all my problems. I can manage full-volume boils, which allows me to brew all-grain. I also net about a case at a time, which is perfect for me. If I brew 2 batches a month I get some extra to share, and every 3rd or 4th batch is a big beer to age in the cellar.

Once you break out of the mindset of "1 batch = 5 gallons", then a lot of doors become open. You can brew batches of any size, allowing you to test new ingredients and recipes at a smaller scale. You can also make the move to all-grain brewing while staying within the confines of a small kitchen. The one downfall is that the vast majority of kits are designed for a 5-gallon batch. So, for smaller batches you will need to be working off a recipe rather than a kit, and you'll need to be able to scale it to your particular batch size.

I realize that it may seem a bit daunting to work from a recipe rather than purchasing a pre-built kit, especially if you need to make modifications to the recipe. But it's really quite simple, especially if you're using brewing software that supports scaling recipes. I use Brewer's Friend, but most of the brewing calculators have some function that will allow you to scale a recipe up or down simply.

One thing to keep in mind when scaling a recipe is that everything will change in equal proportions except for one thing - your boiloff rate. You will end up boiling off the same amount of liquid (or a little more) for a smaller batch than you would for a larger one. For example, if you boil off 1 gallon in an hour, you will start with 6 gallons for a 5-gallon batch, and you will start with 4 gallons for a 3-gallon batch. Why do I mention that? Because, depending on how much you scale the recipe down, it could have an impact on your IBU's. The gravity of your boil affects hop utilization. Since a smaller batch starts at a lower gravity than a larger one (i.e., it is more dilute), you may find that your scaled recipe has more IBU's than the original recipe. In most cases the difference will be negligible, but in hoppier beers it may be enough where you might want to decrease your bittering addition a bit.

My specific process is a sort of a hybrid BIAB (Brew-In-A-Bag) process. I wanted to avoid the need to monitor and adjust the temperature during the mash, so I could just walk away once I mashed-in and return at the end of the mash. My solution is to mash in a 5-gallon beverage cooler that I have lined with my BIAB bag. When the mash is done, I pull the bag and run off into my kettle. While this isn't as simple (or as cheap) as the usual 1-vessel BIAB setup, having a separate mash tun is worth my while.

In part two I will go into a bit more specifics. I will also walk you through a typical all-grain brewday so that those of you who want to follow along at home can get the feel of things.
Posted by Eric Branchaud at 3:44 AM No comments:

Email ThisBlogThis!Share to TwitterShare to FacebookShare to Pinterest
Labels: Ramblings

Yep, too much hops.

Here's another update from tonight's Belma IPA. I mentioned that the hot wort was the consistency of peanut butter. Well, things only went downhill as it cooled. The picture below is of the chilled wort. No, that's not a typo. This lump of green modeling clay is actually the wort in the kettle post-chilling. 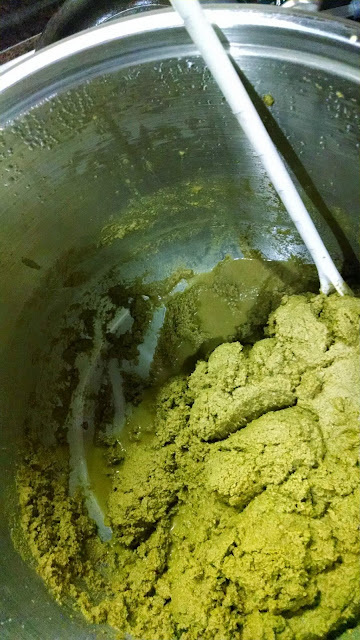 I was rather surprised at how much liquid I was able to extract from this. The whole mass got dumped into my BIAB bag in a small bucket. I then wrung and squeezed the bejeezus out of the bag, and kept pouring the collected drippin's into a 1-gallon jug. I ended up with over 1/3 gallon of liquid (starting from 0.8 gallons preboil volume). We'll see what happens next... 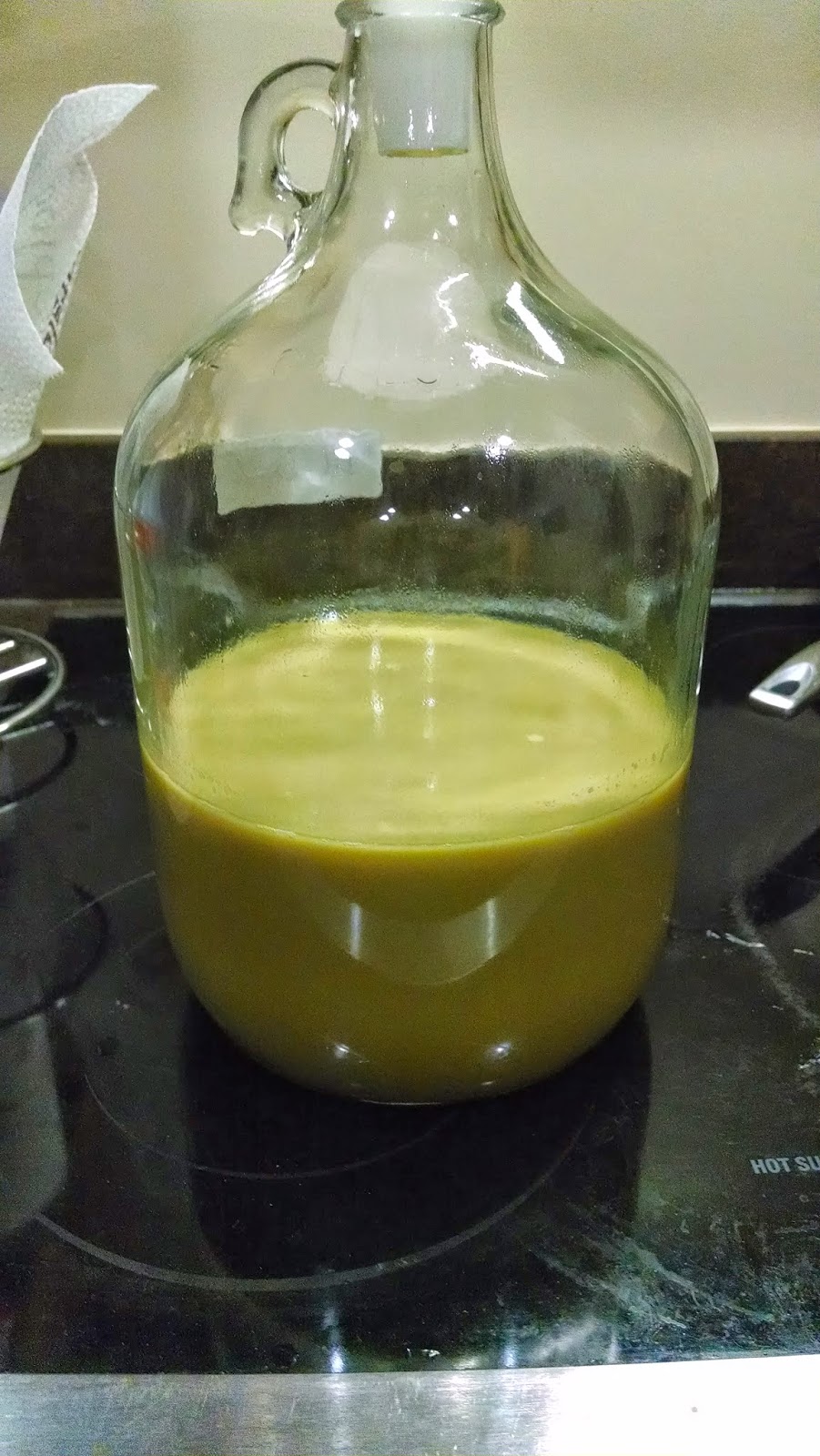 Update from my Belma IPA experiment. One pound of pellets in 3/4 gallon of wort. Try as I might, there's no way I'm going to get a whirlpool going in this. The consistency is like peanut butter. Wish me luck getting this into the fermenter. 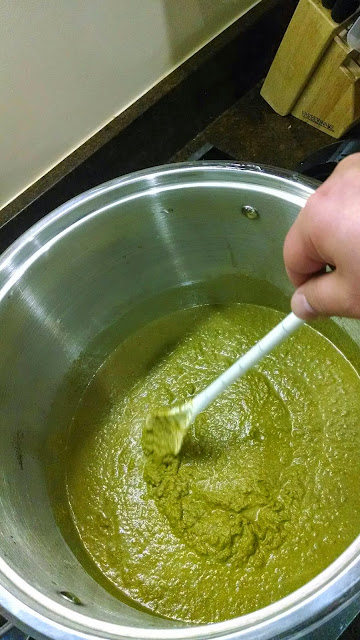 Posted by Eric Branchaud at 5:10 PM No comments:

How much Belma does it take...

Belma is one of those hop varieties that really confirms for myself that the single-hopped test beers I have been brewing are well worth the time and effort involved. The descriptors you see online list orange, grapefruit, pineapple and strawberry (among other things) as being part of the aroma profile for Belma. If you just read those descriptions, you may end up thinking that this would be a great hop to use in an IPA. In particular, you don't find "strawberry" as a description for many hops. This would definitely be a unique note to impart to a beer via hopping.

Alas, my own experience just doesn't find this to be the case. I really found Belma to be a mild hop, without the big, fruity punch that one might expect given the description. In talking with others on some of the homebrew forums, it seems that I'm not the only one who has been a bit underwhelmed by the hop character of Belma.

Since I have just under a pound sitting in my freezer, the question becomes: "What the heck do I do with all of this Belma?". I suppose I could use it for bittering, but I have other hops that I prefer for bittering depending on the style of beer. Instead of letting them sit in my freezer forever, or just throwing them away to free up space, the time has come for a bit of experimentation.

The experiment: Is it possible to take a relatively mild hop and attain IPA-worthy hop character by using a very large amount? You night ask what constitutes a "very large amount". Well, ladies and gentlemen, I don't screw around when it comes to hops. I'm going to brew about 3/4 of a gallon of IPA and use however much Belma I have left (a bit under a pound) in it. I'm going to reserve an ounce and a half for dry hops (so somewhere in the 2oz/gallon rate for dry hops), and the rest is going in for a 1-hour hop stand. This adds up to over a pound per gallon for a total hopping rate.

My thought process is this. Different hop strains contain different concentrations of hop oils, which is where the flavor and aroma comes from. If Belma does contain the oil profile to give the citrus/melon/strawberry/etc notes that have been reported, but at a low concentration, then you could reasonably conclude that more hops will give you more oils, and at some point you will get enough into your beer to get the flavor/aroma profile you're after. Of course, hops contain a lot more than just oils. There may be a point of diminishing returns, where you start to get a significant amount of off-flavors (grassy, woody, vegetal, etc.) due to the volume of hops needed to get the oil content you want.

Once the beer is ready, I'll mainly be concerned with two things. The first is the flavors coming from the hop oils that I'm looking for. The second is whether there are any off flavors coming from the sheer volume of hop material required to get these flavors. If I get a desirable hop character, but start getting off flavors, then further experimentation may be warranted to see if you can "dial in" a hopping rate to get the hop character while minimizing off flavors. Brewday should be tonight. Stay tuned.
Posted by Eric Branchaud at 10:46 AM No comments: